With the referendum on voting methods in New Zealand coming up in December, I thought it might be interesting to draw up some graphs to compare the results we’re getting under MMP to the results we got under First Past the Post, the system we used to use.

I’ve plotted two sets of graphs: a pair of time series showing error over New Zealand’s electoral history since 1890, broken out to show which parties benefited and lost from error (shown below – click on the graphs to expand them), followed by a complete set of graphs of NZ’s electoral results since 1890 (on a separate page). 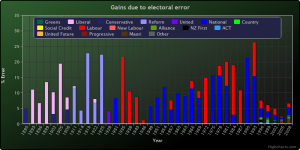 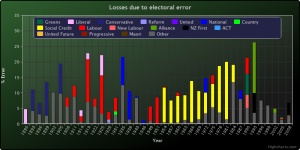 The time series are the most interesting: they show that electoral error has dropped significantly from the 1996 election onwards, when MMP was adopted, from an average of 12.4% error to an average of 5.5%. It’s important to note that the variance dropped significantly, too – from a standard deviation of 6.3% to 2.1%. For those not versed in statistics, this implies that the error under FPP is less clustered around the average – despite an average of 12.5%, much higher levels of error were possible under FPP. Looking at the data, we can see that six out of New Zealand’s 34 elections under FPP had error of 20% or greater – that’s an election in which 1 in 5 New Zealanders effectively had their votes handed to another party. That’s not democracy.

Looking at the details of who gained and lost, you can see that pretty much universally, gains went to one of the larger parties; the Liberal and Reform parties in the early years, followed by National and Labour since the 1930s, with National gaining about two thirds of the error votes since 1949 (in those elections, an average of about 9.4% of New Zealanders had their votes transferred to National, compared with 4.4% for Labour).

The losers, then, were predominantly small parties, though Labour, now a large party, took a hammering in the 1910s and 1920s during their formative years. More recently, the Social Credit party had virtually no seats in Parliament between 1954 and 1981, despite winning more than 6% of the vote in each of those elections, and sometimes up to 20%. Again, that’s not democracy – if they’d won that many votes under MMP, they’d have 16 or 17 MPs, compared with the maximum of 2 they had in 1981 and 1984.

My goal in doing these graphs was to make the numbers a little more accessible for people considering their options in the coming referendum. While MMP has its flaws, it’s important to remember that a vote against it should be tempered with a vote for a better system:

Under our current system of MMP, error still exists. There are three primary reasons for this:

My current opinion is that the 5% threshold rule causes too much electoral error to be warranted for any reason. I’ve heard the argument that helps prevent small parties from holding the balance of power, but it seems to me that deal-making and compromise are what politics is all about. I’m keen to other arguments if they’re out there – I’ve not looked very deeply into the reasons for this, so my opinion is really just gut reaction. In the end, I have to weigh all arguments for the threshold against the fact that with it, between 2 and 6% of New Zealanders will have their consent given to another party, which is, as I keep saying, not democratic. To put that in perspective, that’s between 50,000 and 150,000 people disenfranchised.

A couple of details, then:

Since I can see others wanting to use these graphs, here’s a license for doing so:

This work is licensed under a Creative Commons Attribution-NonCommercial-ShareAlike 3.0 Unported License. Note that copyright applies for the raw data from Elections NZ and HighCharts, the Javascript graphing library I’ve used for the interactive graphs).